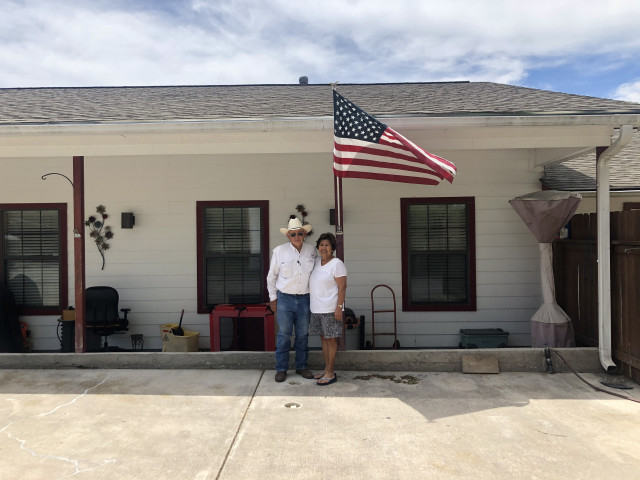 “I didn’t think she’d wait for me,” Elias Verver says more than 50 years after he left Buda, Texas and his high school sweetheart, Angie, for a tour of duty in war-torn Vietnam.

But she did wait for him and the couple got married shortly after Mr. Verver returned from Southeast Asia where he was awarded a Bronze Star for his bravery, honor and sacrifice.  Once he got out of the U.S. Army, Mr. Verver worked as an electrician – and the couple raised two children.

After the kids grew up, Mr. and Ms. Verver remodeled an old home that sat on property where Mr. Verver’s father, and his father before him, had lived.  Twenty years later, the home needed some serious attention – including a new roof and a new HVAC.  But Mr. Verver, who is 72-years-old and has been diagnosed with the early signs of Parkinson’s disease, was physically unable to do the work himself and the couple lacked the finances to pay for the job.

There’s a happy ending to this story, though.  Earlier this year, using funds generously donated by The Home Depot Foundation, Meals on Wheels Central Texas’ Home Repair program put a new roof on the Ververs' house and installed a new HVAC system. And the assistance didn’t stop there.   Because Parkinson’s disease makes it increasingly more difficult for Mr. Verver to get around, the renovations also included removing an old bathtub and replacing it with a walk-in shower to make everyday life easier for him.

“We would have had to go into debt,” says Mr. Verver when asked what he’d like to say to The Home Depot Foundation and Meals on Wheels Central Texas for their support of veterans.  “It was a blessing.  They did a fantastic job for us and we really appreciate it.”