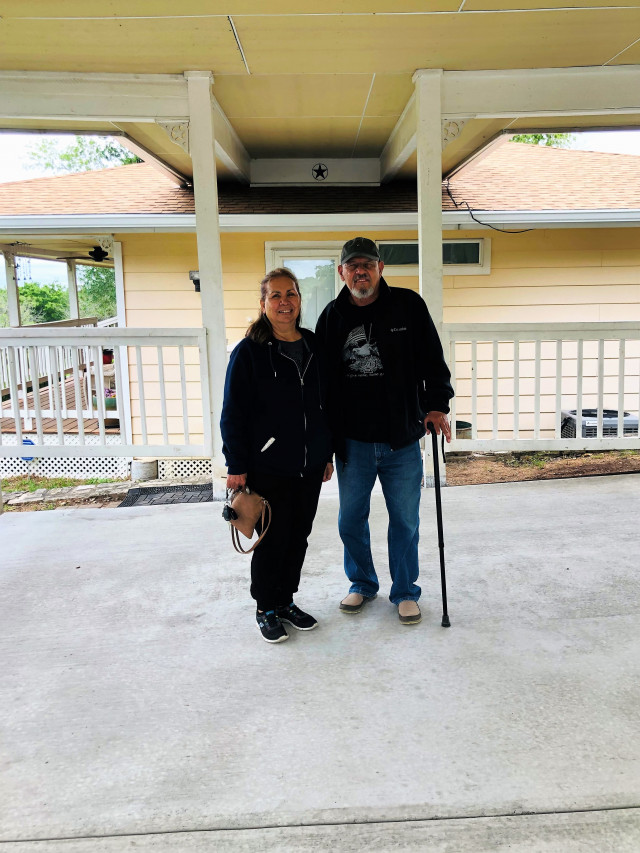 “I didn’t think I would get old this fast,” says 67-year-old Austin native Ruben Rocha with a chuckle that belies his physical pain.

With two major back and neck surgeries behind him and more on the way, Mr. Rocha finds it extremely challenging to sustain the fierce work ethic that has fueled him since he was 7-years-old and shining shoes to help support his family of 10. That sense of duty also prompted him to enlist in the U.S. Marines Corp when he was 17 during the height of the Vietnam War. He was stationed at Quantico, VA before receiving his honorable discharge.

For the past 12 years, he and his wife, Corine, have lived in Southeast Travis County on land his father bought in 1971. Ruben and Corine Rocha built the home themselves and Mr. Rocha was particularly proud of the pretty steps that led to their front door.

For their first several years there, the couple was able to do what was needed to maintain the property. But then their health began to decline and doing the work themselves was no longer possible.

“All I had worked for, to see it deteriorating, was not a good feeling,” Mr. Rocha recalls. Those front steps he was once so proud of now posed a serious safety hazard. “I made them pretty when I built the house. But now they were hazardous. I needed a ramp.”

The Home Depot Foundation (THDF) and Meals on Wheels Central Texas (MOWCTX) teamed up to solve the dangerous problem. Using funds generously provided by THDF, the MOWCTX Home Repair program built that ramp - and now Mr. Rocha can safely get in and out of his home. “We are abundantly grateful for this help and are very appreciative,” says Mr. Rocha. “What [THDF and MOWCTX] do is a blessing to veterans.”