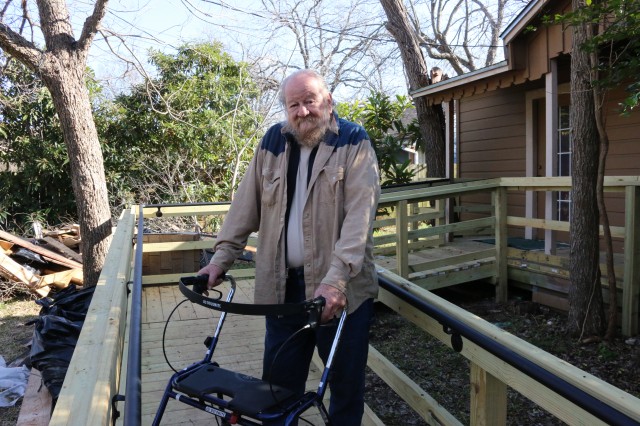 Tom Donovan didn’t let the fact that he was born with polio keep him from serving his nation.  In spite of the crippling disease  - he wore a leg brace until he was in the 4th grade - he went on to spend four years in the United States Air Force in the 1960’s.

After completing his military duty, he spent the next several decades building homes in Central Texas.   But as he grew older, his legs began to give out on him again.  Not only did that make work challenging for him - it also grew more difficult for him to get around the home he bought in 1980.  The house, which was built in 1949, needed work – but he was physically unable to fix things himself.

Last summer, Mr. Donovan was diagnosed with brain cancer and he underwent surgery in December.  While he was in the hospital, Meals on Wheels Central Texas and the Home Depot Foundation teamed up to build a ramp outside his home, and retrofit his bathroom to include a walk-in shower, all of which make it easier for the 74-year-old veteran to get around his house.

When asked what the changes mean to his day-to-day life, Mr. Donovan, a quiet man, replies, “it’s huge.”