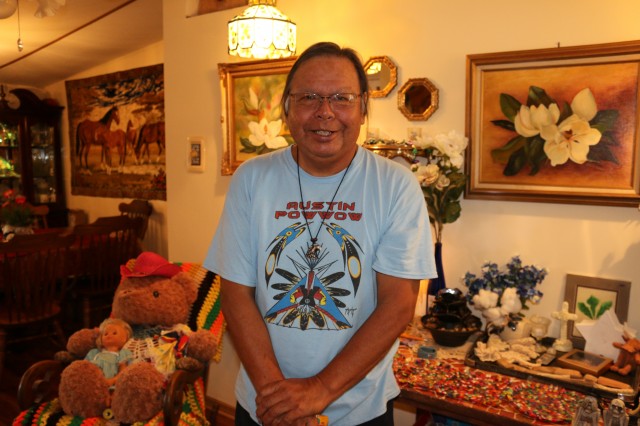 “I joined the Navy to see the world, and they sent me to Kingsville, Texas,” Ted Denny says with a laugh – shaking his head at the thought of being stationed in a landlocked town 35 miles from the Gulf of Mexico.

Mr. Denny served his nation from 1971 to 1975.  He later worked on the Trans-Alaska Pipeline before going to school to learn how to be an auto mechanic; a talent that served him well in his working life.  He spent more than a decade employed in the service department of Buick dealership in Austin, Texas.

A man of many skills, Mr. Denny later worked as the assistant administrator for a computer firm, and after that he got a job as a carpenter.  When his health prevented him from climbing ladders, he started his own business working on computers.  Then his wife, Beth, was diagnosed with Alzheimer’s and he took care of her until she passed away six years ago.

He still lives in the house they bought 20 years ago.  Until his health deteriorated, Mr. Denny was able to keep up with home repairs himself.  But that’s no longer possible and conditions in the home were becoming unsafe – with holes in the floor in certain places.

But Meals on Wheels Central Texas, through generous funding provided by the Home Depot Foundation, was able to remove the existing subflooring and carpet and replace it with vinyl plank flooring.  Other repairs included removing and replacing moldy sheetrock, and replacing a broken HVAC system.

“I used to be able to do this kind of work.  I just physically can’t anymore,” says Mr. Denny.  “The repairs mean a lot to me.  They mean I get to stay here longer.  Look at the house.  It looks fantastic!”