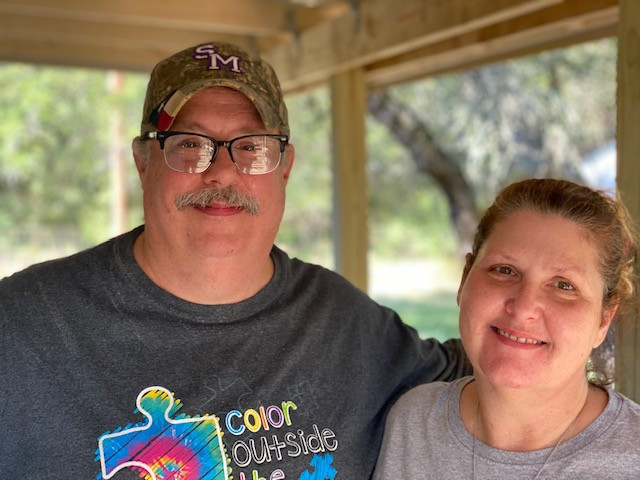 When it came to serving his country, he learned from watching his father.  “My dad was in the Navy,” John Dixon says.  “That’s what I decided to do with my life.”

So, the younger Mr. Dixon joined the U.S. Navy as an 18-year-old in 1981.  He was an aviation hydraulics mechanic and served onboard nearly a half-dozen different aircraft carriers, where he worked on F-4 Phantom and F-14 Tomcat jets.  Mr. Dixon was deployed to the Middle East during Operation Desert Storm and suffered a knee injury that has led to mobility issues later in life.

When he retired from the military in 1996, he took a job as a trim carpenter and worked his way up to construction superintendent.  These days, he serves as Transportation Special Needs Trainer for the school district in San Marcos, Texas, where he and his wife, Angelia, live.

Mr. Dixon’s service to our nation came at a cost.  The old knee injury makes it “difficult to get around.  Any time I put my foot on the ground, I hurt.”  He also has suffered hearing loss due to working around fighter jets for years – and he lives with PTSD.

Recently, it became evident that the home where he and Ms. Dixon have lived for six years desperately needed work.  “The old floor was just breaking away underneath us,” recalls Mr. Dixon.  Fortunately, generous funding from The Home Depot Foundation allowed Meals on Wheels Central Texas to tear out the old flooring and replace it with vinyl plank laminate.  Renovations also included building a new ramp which has made it much easier for Mr. Dixon to get in and out of his home.  “Getting groceries into the house is now so much less work,” he says.

“It’s frustrating that I couldn’t do the job myself,” he adds.  “But I don’t know that I can express the gratitude that we have for The Home Deport Foundation and Meals on Wheels Central Texas.  The work was above and beyond our wildest expectations!”