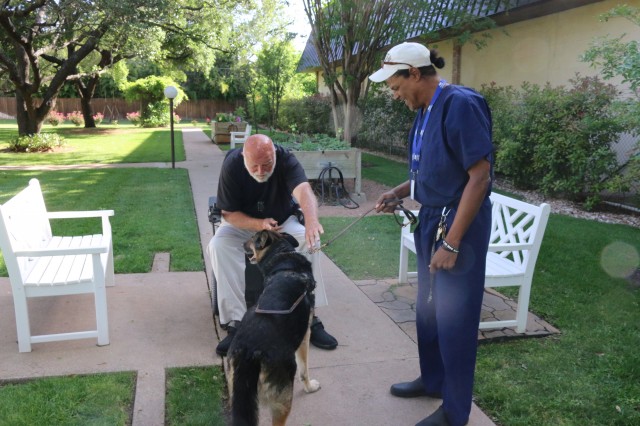 Long before the two men met, Mr. Snyder spent his entire professional career helping others.  He certainly had the qualifications to do so having earned three Master’s degrees – one each in Theology, Education, and Clinical Psychology.

But Mr. Snyder lost his eyesight several years ago and moved to Austin to receive services from Criss Cole Rehabilitation Center, a rehab training facility for people who are vision-impaired. He became a client of Meals on Wheels Central Texas In-Home Care in 2015 when a degenerative neuromuscular disease robbed him of his ability to care for himself and, eventually, his ability to walk.  Fortunately, our friendly, dedicated attendants were able to assist him with the activities of daily life.

Charles Johnson, who has worked for MOWCTX In-Home Care for seven years, has been helping Mr. Snyder since 2016.  Mr. Johnson learned early in life how to care for others. “I took a lot of this learning how to take care of people from my mom, who I lost at a young age. So it taught me to grow up fast and to learn how to take care of people, to have sincerity and compassion for them,” he recalls.

Every weekday at 8am, Mr. Johnson arrives at Mr. Snyder’s North Austin apartment and begins cleaning.  “I’ll start with the bedroom area and I’ll just work my way to the front of the [apartment].  I’ll wait until he’s ready to take a bath and I’ll give him a bath,” he says of his daily schedule. “There are things I can’t do safely,” Mr. Snyder says of the daily routines of living, such as bathing.  “The odds of me falling are dramatically higher than for somebody else. Charles, every day, gets this large body and cleans it.  It’s like a truck wash,” he says with deadpan humor.

He refers to Mr. Johnson as “a steady companion who sees things that need to be done.”  He adds, “Today, he alerted me to a minor injury on my leg.  I didn’t know it was there. I have no feeling in my legs and I couldn’t see it. So you know, it’s that kind of thing before it becomes a crisis and I lose a leg.”

“He’s like a brother to me,” says Mr. Johnson of Mr. Snyder.  Mr. Snyder, meanwhile, credits Mr. Johnson and Meals on Wheels Central Texas In-Home Care with helping him to live independently: “I mean, it’s a hundred different things that not only make life easier but safer.”