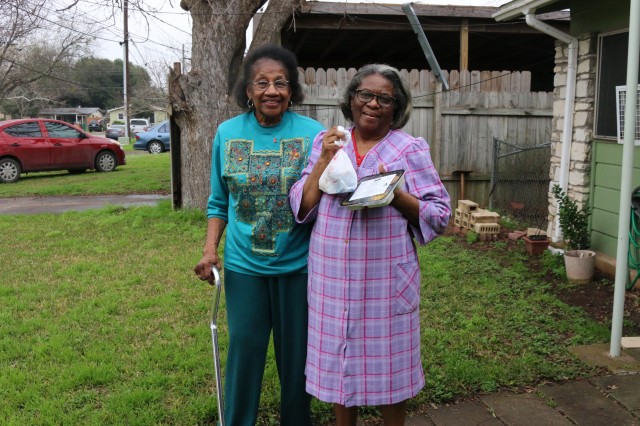 It was a television commercial that led Estella Akins to Meals on Wheels Central Texas.  “I was watching TV and an ad came across that said ‘if you have time, come volunteer with us’.  I thought about that and I thought, ‘you know, I need to do that’,” she recalls more than two decades later.

Now 87-years-old, Estella Akins still delivers her Wednesday route, though these days she’s older than most of the clients on her route.  Giving back to her community has always been a priority in her life.

She was born in the East Texas town of Palestine and moved to Austin to attend college.  After graduating from what was then called Huston-Tillotson College in the early 1950’s, she began a long career in education.  Her late husband, Dr. Charles Akins, also spent decades as a local educator, and is the namesake of W. Charles Akins High School in Austin.

Just as it has since she first signed up to volunteer with us, Ms. Akin’s meal route takes her through East Austin, the part of town in which she’s lived since the 1950’s.  Gentrification in the area concerns her: “It feels like they are pushing the originals out and bringing in the new.”

Asked why she continues to volunteer at an age when many others are slowing down, she says “I guess the main word is ‘help’.  People need it.  You have some that really need it.  You want to be a servant.    That’s what God said, ‘go out and be a servant’.   I’m delivering friendship.”

When asked how long she plans to keep delivering meals and friendship, she says “I’m trying to make it to 90.  Like the old song says ‘if the Lord is on my side’, I believe I’ll make 90!”