“I’m Getting Nutritious Meals Which I Need” 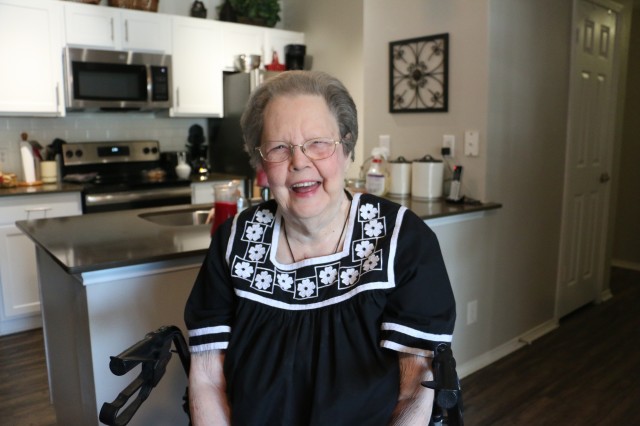 “I never dreamed I would ever ask for any help because I’ve always been so independent,” says 92-year-old May Rogers.

Born and raised in Houston, Ms. Rogers got married not long after she graduated from high school.  Her husband, William “Buck” Rogers, had been a nose gunner in a B-24 in the Pacific Theater during World War II.  After the war, he worked for an insurance company and Ms. Rogers became a stay-at-home mom taking care of their daughter and son.  “I was part of those generations where (women) stayed at home and raised children,” she explains.  Ms. Rogers moved to Austin after her husband passed away in 1987.

For years after that, she was still able to fend for herself.  And even when she was diagnosed with macular degeneration, an eye disease that permanently robbed her of her sight, Ms. Rogers still hated to seek assistance from others.  “It just went against my grain,” she says. But, at the same time, preparing meals for herself was a very dangerous endeavor. “When this eye problem came about, it got harder and harder for me to cook.  I couldn’t read the instructions on the frozen dinners or see the dials on the stove.  So I was living on sandwiches,” she recalls.  “I finally broke down and called (Meals on Wheels Central Texas) and I’m glad I did!”

As a result, our dedicated volunteers now deliver hot, healthy lunches, quick safety checks, and friendly visits to the Southwest Austin apartment Ms. Rogers shares with her grandson who works during the day.  He cooks her dinner at night and MOWCTX handles the midday meals. “The [MOWCTX] food is nutritious.  I’m not a big vegetable eater, but I make myself eat them because I know I need them,” she says.  And she looks forward to the daily visits from the folks who bring her meals.  “They’re so courteous.  Everybody I’ve dealt with has been extremely nice.  The volunteers are very pleasant,” she says with a smile.

Asked what MOWCTX means to her, she replies “it means I’m getting nutritious meals which I need.  It also means I don’t have to eat sandwiches every day.

That’s important to me and I appreciate it every much.”