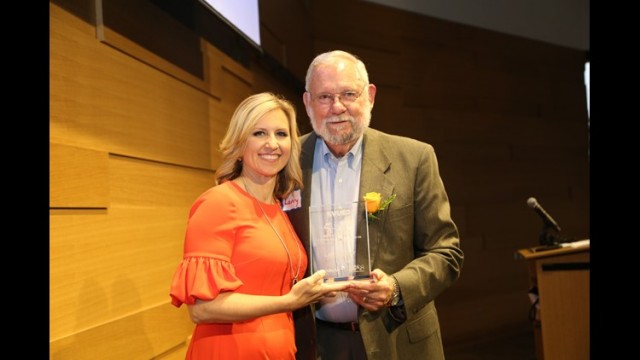 Three days a week, volunteer Larry Miller comforts our most vulnerable Central Texas neighbors.  Some of the recipients of his kindness are only eight days old; others have been around for eight decades or more.  Mr. Miller’s compassionate efforts on behalf of the very young and the very old were recently recognized by KVUE-TV who awarded him with one of the station’s annual Five Who Care community service awards.

Mr. Miller began volunteering for Meals on Wheels Central Texas in 2008 when he semi-retired as a psychologist.  He still saw patients on Tuesdays, Wednesdays, and Thursdays – on Mondays and Fridays, he would deliver meals.

But he also donates his time every Sunday, rocking infants in Seton Medical Center’s Neonatal Intensive Care Unit (NICU).  The babies hold a special place in his heart because his triplet grandsons spent time in a NICU when they were born in 1989.

“I get a great joy out of doing for others,” he says when asked about the volunteerism that earned him the Five Who Care award from KVUE.  “It gives me a great appreciation of my own life.”

To watch a video KVUE-TV produced about Larry Miller and his volunteerism, please visit bit.ly/2KayXOk