“One of the Best Things That Ever Happened to Me” 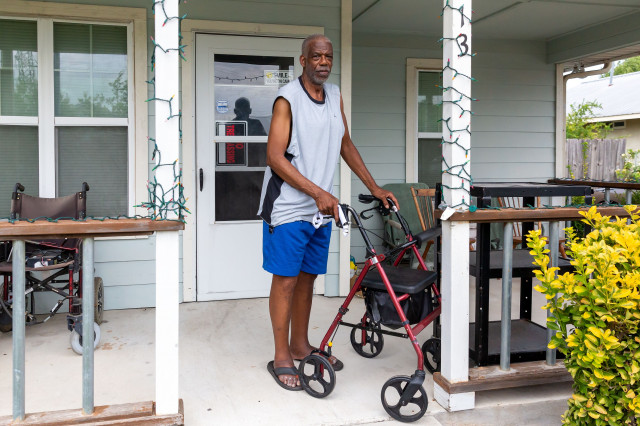 When Lionel Dotson was 17-years old, he was one of the best basketball players in Texas.  As starting guard for Lincoln High School in La Marque, outside of Galveston, he carved out a name for himself as well as a spot on the All-State Team.  In the late 1960’s, nearly every major college team in the nation offered him a scholarship – or at least those who allowed Black athletes on their teams at the time.

He chose to play for the University of Houston and legendary coach, Guy Lewis, and he was living up to his reputation until he tore up his left knee during practice.  His days as a top-tier athlete were over.

Mr. Dotson is now 71-years old and that knee still causes him pain.  The college injury along with other health issues make it extremely challenging for him to get around – much less cook.  That’s why he relies on Meals on Wheels Central Texas for nourishment:  “They bring you [lunches] and they’re good.  And you get a case worker that will help you.  If you need anything, you can call your case worker.”

Mr. Dotson’s case manager is the one who told him about our Connecting Seniors with Technology program which helps older adults increase their knowledge and comfort level with computers and technology.  We provide the technological hardware and training to help isolated seniors and individuals with disabilities learn to connect with the internet and the outside world.  The tutoring is done by dedicated volunteers. (Note:  All in-person tutoring has been suspended during the COVID-19 pandemic.)  “I had to learn how to use a computer and how to get an email address,” he chuckles.  But he was a fast learner and he was soon using his new skills to video chat with his physician.

He credits the technology program with opening up the world for him – especially in the middle of a pandemic.  Communicating with others is now a whole new experience.  “Looking at somebody while you’re talking to them, it makes a big difference,” he told MOWCTX during a recent online interview. “When Meals on Wheels came into my life, that was one of the best things that ever happened to me.”