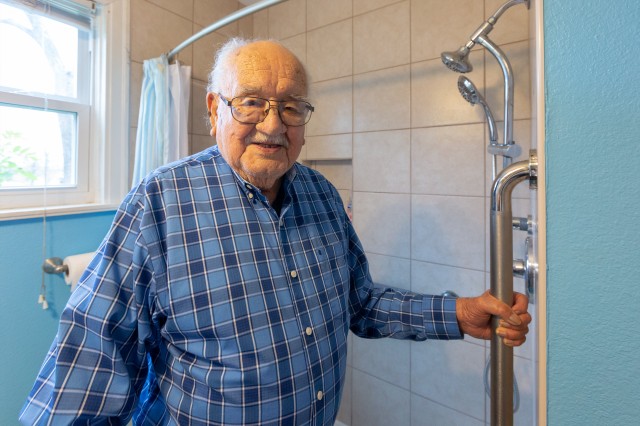 When American General Douglas MacArthur walked ashore at Leyte in the Philippine Islands in October 1944, two years after he famously vowed “I shall return”, 20-year-old Joe Celestino of Austin was there.  “[MacArthur] returned with a bunch of people, and I was one of them,” says Mr. Celestino, who served in an amphibious tractor battalion during World War II.

After the war, Mr. Celestino got married, and he and his wife, Nancy, eventually had six children.  He worked for 30 years in facility maintenance at Bergstrom Air Force Base in Austin.  Ms. Celestino passed away eight years ago, and her husband lives alone in the house the couple bought 55 years ago in East Austin.

Recently, the home needed attention.  The central air and heating system had to be replaced as did the plumbing - and old carpet and tile posed serious tripping and slipping hazards. The foundation needed work and so did the bathroom – a walk-in shower would be much safer for Mr. Celestino to use than the existing bathtub.

Through funding generously provided by The Home Depot Foundation, Meals on Wheels Central Texas’ Home Repair Program transformed his house into a safer place for him to live, and Mr. Celestino could not be happier:  “I’m 94-years-old and I don’t want to move! This is home!”