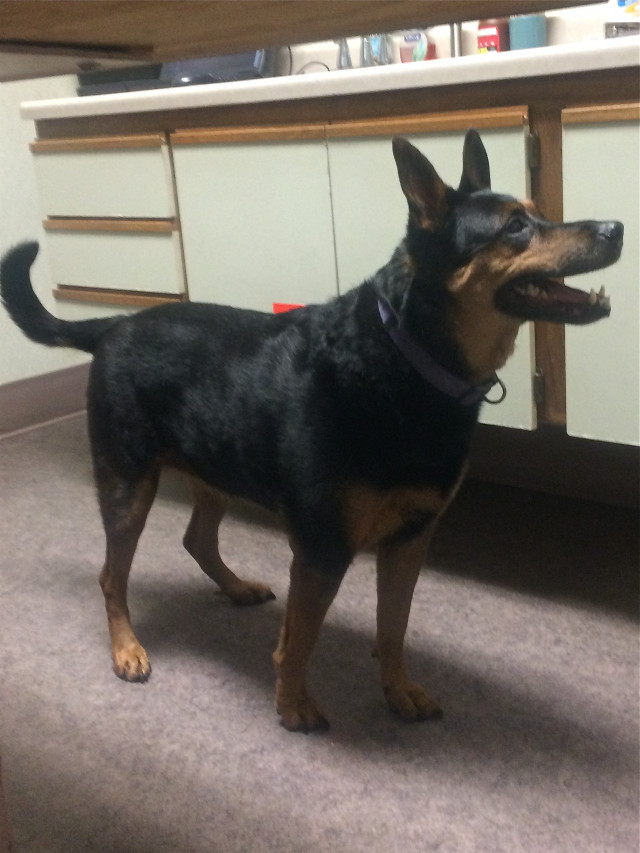 This story was written by Danielle Madrid, Director of Development and External Relations at Texas Veterinary Medical Foundation (TVMF).

When Anita Cabrera’s son passed away in 2012, she took comfort knowing that his dog, Kara, was still by her side. Kara had been found as a bedraggled and emaciated stray that her son took in, cleaned up, and brought up to date on veterinary care. When he became ill, Ms. Cabrera cared for him, and for Kara, until he passed away. Since then, her dogs Kara and Aiko have provided her with a sense of purpose and helped her grieve for her son. “It was his gift to me after he left,” she said, “He was my only child, and it was Aiko and Kara that are the reason why I got up in the morning. They helped me so much.” Ms. Cabrera continued, “I still grieve for him, that never goes away, but I think I’m here because of them.”

Ms. Cabrera has been a Meals on Wheels Central Texas (MOWCTX) client for several years, receiving daily hot nutritious lunches, and her dogs Aiko and Kara have also received monthly deliveries of dog food through the MOWCTX PALS (Pets Assisting the Lives of Seniors) program. Through the LEAP program, TVMF’s partnership with PALS, they have also received annual veterinary care, including flea and heartworm preventative. When Aiko had to be put down this spring due to complications from diabetes, the LEAP program also helped pay for her euthanasia cost.

At an annual vet visit this spring, Kara was diagnosed with a mass on or near her liver. A follow up ultrasound confirmed that the mass was on her liver, and that there was another nodule on her spleen as well. The radiologist reviewing her case gave a preliminary diagnosis of hepatocellular carcinoma for the liver mass and was hopeful that the nodule on the spleen was benign. Due to the complicated nature of the proposed surgery to excise the masses, Kara’s veterinarians Dr. Jon Brandes of Austin Vet Care Metric and Dr. Chad Harris of North Austin Animal Hospital consulted with a surgical specialist, Dr. Kelly Might of Mobile Veterinary Specialist in Austin. After reviewing Kara’s case and speaking with Ms. Cabrera, Dr. Might offered to perform the surgery at North Austin Animal Hospital free of charge. Kara was booked for surgery, and Dr. Might and Dr. Harris excised the mass on her liver and removed her spleen.

Kara recovered well from her surgery, so much so that Ms. Cabrera was having a hard time restricting her activity until the stitches came out. Unfortunately, while the liver tumor was successfully removed and would have been curative, the mass on her spleen came back as hemangiosarcoma. Despite this diagnosis, Ms. Cabrera remains so thankful of the care that Kara has received through the LEAP program. “We couldn't have gone this far without the help that we've had. Right now, I feel like we're in a good place,” Ms. Cabrera said. “Kara seems to be happy and well.” While she knows that her time with Kara is limited, Ms. Cabrera is taking things one day at a time, and is thankful for all that she has received. She said, “My family is in New York and they know I have this relationship with my dogs so they you don't really worry as much about me… I also have amazing people around me. I’m so fortunate and grateful.”

TVMF is deeply grateful for the generosity of the donors and supporters who make the LEAP program possible, especially to our corporate sponsors--Boehringer-Ingelheim Animal Health for donating vaccines, Frontline Gold flea and Heartgard heartworm preventatives and IDEXX for donating diagnostic services. We are also sincerely thankful to Dr. Kelly Might for donating his advice and expertise to this case, which is giving Ms. Cabrera several more months of quality time with her beloved Kara.