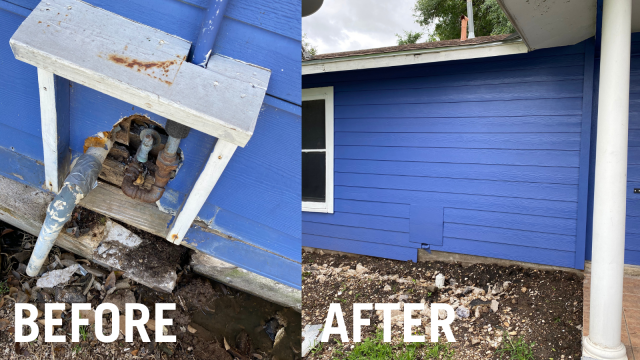 Austin resident and Army veteran Bernardo Romero had never seen anything quite like the winter storms that hit Texas in February of this year. Mr. Romero was one of the many Texans left without running water or heat during this difficult time. Luckily, he was able to survive off of the meals he had left over from the previous weeks’ Meals on Wheels Central Texas delivery and bottled water.

The winter storms caused the pipes in Mr. Romero’s house to freeze, leading to water damage and a collapsed foundation in his home. Mr. Romero has lived in his Austin home since 1995, and it became increasingly important that he remain among familiar surroundings after going blind over a decade ago. Because of the generous support of the just keep livin Foundation, Mr. Romero’s entire bathroom including septic tank, sewer lines, foundation, vinyl flooring, and more, was renovated. When Mr. Romero’s home was repaired, he felt very grateful. “The repairs meant a lot as I was struggling with the cold. I was lucky I had the support of Meals on Wheels.” Now, Mr. Romero is able to continue living in the safety of his own home. “Your help has given back my comfort.”