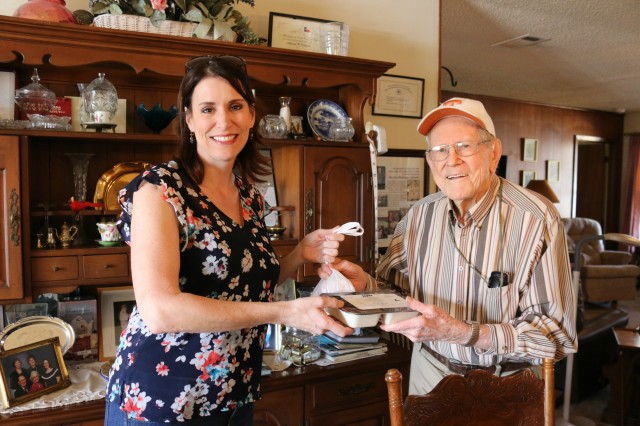 While Malcolm Caldwell’s sense of sight and sense of hearing may have diminished over his 97 years of life, his sense of humor remains just as sharp as ever.  He just doesn’t get to employ it as often as he used to - because, these days, Mr. Caldwell lives alone in the South Austin home he and his wife, Bernice, bought 35 years ago.

The two met in a youth fellowship program and got married in 1943.  Five months later, he joined the military and spent two years in the Army Air Corps.  After World War II, Mr. Caldwell returned to Austin and went into the family business, Caldwell Variety Store on South Lamar.  He later manufactured aluminum awnings before finally settling in the field of heating and air conditioning - and spent the last 17 years of his working life on the University of Texas campus, helping to keep UT’s 3,000-ton refrigeration units, called chillers, operational.  On the home front, he and his wife raised three daughters and were both very active in their church - volunteering their time to help others in need.  In April 2011, 68 years after they got married, Ms. Caldwell passed away.

Nowadays, Mr. Caldwell relies on Meals on Wheels Central Texas to help him remain independent.  “Meals on Wheels sees to it that once a day, I get meals that are well prepared, nutritious and filling.  I look forward to it,” he says.  He also looks forward to the daily visits he receives from our dedicated volunteers: “It’s a bright spot in your life when somebody knocks on your door and comes in and says a word or two, they always greet me with great affection.  It’s easy for me to love people with Meals on Wheels because they’re doing God’s work.”

MOWCTX volunteer Jenny Holm delivers his lunch every Tuesday and she relishes those visits with Mr. Caldwell, whom she calls by his nickname, Micky. “One of my favorite things about Micky is I can count on every time I see him he will open that door with a smile and a hug.  My Tuesdays with Micky are an absolute day brightener,” she says.

When asked how he maintains such a sunny disposition, Mr. Caldwell credits the message on a birthday balloon a friend gave him when Mr. Caldwell turned 50: “It said ‘it’s not your age, it’s your attitude’.  I liked that.  So I try to keep a good attitude.”