“You Are Our Guardian Angels” 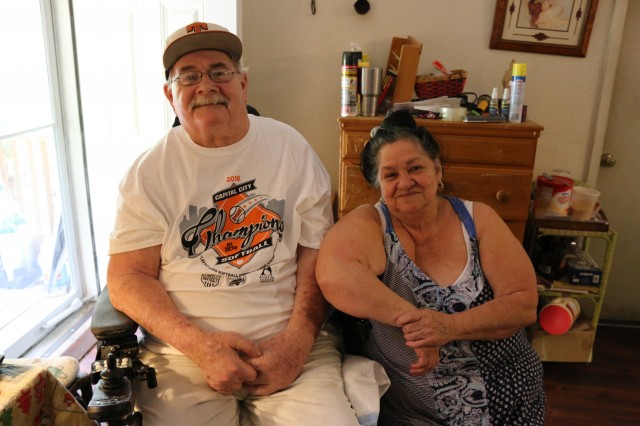 “I was a waitress and he was a carpenter.  He was one of my favorite customers because he would always leave me a 50 cent tip.  Back then, people didn’t leave 50 cent tips for a cup of coffee,” recalls Pam Morgan of how she and her husband, Roy, met 50 years ago.

The Morgans have been married for 47 years and live in the East Austin home they bought in 1989.  They raised five children there.  Over the years, Mr. Morgan, who served in the U.S. Marines from 1964 - 1966, worked his way from carpenter to construction superintendent.  Ms. Morgan was employed by the Austin school district, working with students with intellectual disabilities.

Things began to change in 1999 when Mr. Morgan was diagnosed with Multiple Sclerosis.  “I started out with a cane, then a walker, and then a wheelchair,” he says of the crippling effects the disease took on his body.  At the same time, Ms. Morgan began to face health issues of her own, including diabetes and chronic arthritis.  That’s when they turned to Meals on Wheels Central Texas for assistance.

The couple depends on our lunchtime meals to get the nourishment they need, and they love the fact that their lunches are delivered right to their door by dedicated volunteers.  “It’s like being in a cafe, ordering your food, and then having it arrive,” Mr. Morgan says with a laugh.  “The volunteers are the nicest people, they always ask how you are,” he adds.

Our home-delivered meals and safety checks go a long way in helping the Morgans live independently.  But last year, major problems with their home threatened their ability to continue living there.  A roof that leaked, and old carpeting that was difficult for Mr. Morgan to maneuver in his wheelchair, were just some of the challenges. Years ago, Mr. Morgan could have fixed anything that went wrong with the house.  But that was no longer possible, and, as Ms. Morgan puts it “we couldn’t afford to fix it.”

Fortunately, our Home Repair program and The Home Depot Foundation were able to transform the Morgan’s home into a safer and healthier place for them to live.  We replaced the roof, tore out the carpet and installed vinyl plank tile (which Mr. Morgan reports is much easier to navigate in his wheelchair), and retrofitted an old bathtub into a walk-in shower.    With his keen knowledge of construction, Mr. Morgan couldn’t be happier with the finished product.   “The Home Depot and Meals on Wheels Central Texas blessed us with doing this job, otherwise we never could have done it,” he says.

When asked what Meals on Wheels Central Texas means to him and his wife, Mr. Morgan says “You are our guardian angels.”